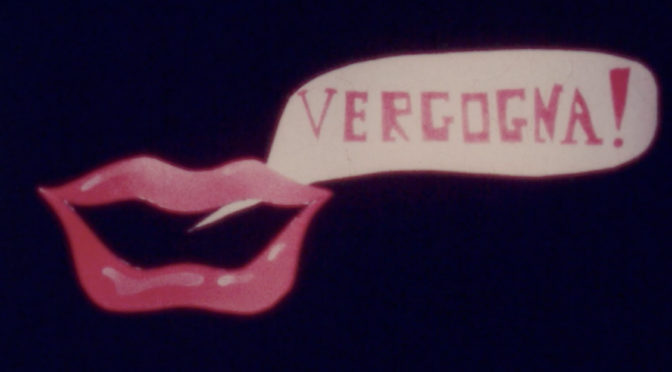 A Super 8mm amateur film, made in 1975, abandoned in the director’s basement for years, seriously damaged by the humidity coming from the lake near her house: this is the starting point of Undead Voices, the documentary by Maria Iorio and Raphaël Cuomo which aims to revive the feminist film Donne emergete! by Isabella Bruno. The story of Donne emergete! is shared by many films about militant feminism: «There was not enough interest in preserving them and they were considered unworthy» commented the curator and art historian Annamaria Licciardello, emphasising how this issue adds to that of the already limited number of feminists who have tried their hand at directing, in this historical period.

«They were young girls who did not possess the means to make films, as well as being kept away, as is still the case, from all that is technical-scientific or technological, and thus dominated by men».

So little has been produced, and just a small part of that has even been preserved: «There truly is a hole in history» Licciardello added.

Undead Voices reaches us like a faded cry from the past. From the deteriorated film emerge voices and bodies frozen in time, preserved in an eternal struggle. The feminist chants from the 1970s punctuate the succession of damaged frames, from which the feminists of the past emerge like spirits. The blurriness, prearranged by the director, hints at the resurgence of women from the invisibility they have been trapped in for centuries. Their voices can barely be heard, they come from the afterlife. They are, like the title claims, undead voices.

Like Donne emergete! And Undead Voices, È solo a noi che sta la decisione too is an amateur feminist film by Isabella Bruno. In the style of a pamphlet, which was very popular in militant cinema during that time, the film combines in a single, fluid narration the newspaper headlines, the pictures and the interviews which describe the abortion debate, from the hypocrisy of the Church to political opportunism. The debate has just begun to heat up, men have recently started to care about it, yet women have been fighting for years. They are tired of clandestine abortions. They are tired of being treated as birthing machines, like actual “corridors” walked tirelessly by husbands, doctors, and children, to quote a woman interviewed by Luigi Comencini in L’amore in Italia, two years later.

The screening of these two works, both of which gain resonance from each other, takes place, forty years after their creation, in an only seemingly different landscape.

This reminds us that women need to remain vigilant, for the pages of history turn quickly and they are the first to suffer their fleeting changes.

Those coloured shadows seem to hang on by their fingernails to a right which has now been granted but is not sufficiently accessible. Those undead voices seem to intone their chants with more conviction, lest the recently granted right be denied again.

«But a day will come when all the dead women will join those who are alive to take revenge on the entire world which wanted them to remain silent in a lake of blood, loving, smiling and happy».